Bringing the Past Alive...

Papyrus and its origins

The first recorded use of papyrus was a piece found in a First Dynasty tomb of Hemaka, an official of the court around 2900BC. The scribes who wrote the ancient Egyptian texts had to be very familiar with the use of papyrus. the Greeks actually called the plant papuros, but named the actual writing material bublos.

The papyrus is made by slicing thin sections from its tall reed and then laying rows of the dampened sections layer upon layer. It is then pressed between sheets of cotton to remove as much of the moisture as possible. The sheets are then dried. The finished sheets are very strong, and were used exclusively by the Egyptians for many years. They began an export trade across the Mediterranean, and continued to hold the monopoly on it until eventually the Greeks and some other civilisations discovered the techniques.

The Egyptian used the papyrus plant so profusely that it soon became the symbol of Lower Egypt. A single papyrus stem became the hieroglyph for green, sturdy and fresh.

The Egyptian believed that the written word had special powers, and the very essence of what was written they believed performed wonders, hence the use of hieroglyphs so much throughout Egypt. Writing became a powerful tool in the hands of the scribes, and they soon used it to cement their role in Egyptian society, a role of power within the bureaucratic society of the time.

You will notice that there is rarely a wall or image in ancient Egypt that doesn't bear some hieroglyphic forms. As you peruse the images on these pages here to you will notice the prolific use of Egypt's mysterious written word.

All our papyrus products come from Egypt. We have a range of paintings that are useful purely for display, but also to study. Most of the images you will see are in fact taken from the temples and walls of the tombs of the Pharaohs.

We also have developed our own exclusive range of educational papyrus products that are not available anywhere else. You can look and admire the artwork, you can study the images and their meanings or you can interact.........write your own hieroglyphs on real papyrus, make your own cartouche or even pant your own papyrus.......

We have some of the best deals on Blank Papyrus in Australia.
Great for:

Available in A3, A4 and smaller sizes.

An ongoing resource for the classroom....The CD comes with the following:
Printable Papyrus Lessons -
1 Make your own Cartouche Classroom Set 18 Cartouches to an A4 sheet of Papyrus.
2 Make your own Bookmark Classroom Set 5 Bookmarks with Egyptian Graphics to an A4 Sheet of Papyrus
3 Make your own Ancient Egyptian Business Card a set of 10 Business cards with Egyptian graphics to an A4 page.
Make a series of Mummy Bookmarks
(See samples below in the Classroom Kit 3)
12 Lesson Ideas
Lesson Plans on Ancient Writing
Hieroglyphic Alphabet and instructions.
Full instructionsStudents learn about writing ancient scripts in a fun interactive way!
Lesson Resources on Ancient Egypt.
Photo Image file on Ancient Egypt to use with your lessons.
Plus lots more....
The Papyrus Lesson CD is available for only $9.95 PLCD1
This is a great ongoing lesson resource. It allows you to print your initial lessons on paperfor the students to test their skills in writing Ancient Hieroglyphs and then print the main lesson on our blank papyrus which will be available when you need it. The CD can be shared with the whole school and the teachers may buy the blank papyrus as they need it.
All you need to do is purchase our blank papyrus sheets to print your lessons on.SEE OUR GREAT PRICES ON INTERACTIVE PAPYRUS KITS BELOW.....

Make your own cartouche (single)

This set comprises of a blank sheet of Papyrus A5 size, plus a hieroglyphic pencil and a papyrus bookmark.

30 sheets of business card size Papyrus for the classroom- a lesson on writing in ancient Egypt. Each student designs his own ancient Egyptian business card which he/she writes in hieroglyphics. The teacher swaps the cards around the class so that the students can then work out who each card belongs to.

5 A4 sheets of blank papyrus
Ideal to make your own printable projects from our Papyrus Lesson CD or use your own ideas. Make a scroll, make bookmarks, write invitations and much more. 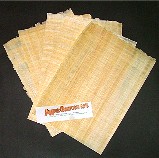 Send to a friend

Why not go to our facebook page and check out new products, images and info!